I have been reading a couple of books on Indian costumes and thought I would write a bit about two of them.

Phiran: of transparent material, form-fitting and ankle length, has two embroidered vertical panels along the length and sleeves.
Odhni: of sheer material, fringed, draped over the head around the neck and shoulders.
Sulwar: tight fitting white pyjamas
Hairstyle: long, worn in a plait ending in a decorative tassel.
Hair ornaments: of pearls, have many strings and loops suspended from the head of the Queen.
Necklace: many stringed gold necklace edged with pearls, and a smaller necklace with a ruby pendant.
Bangles: of graded sizes of gold and pearls.
Baldric: gold and pearl baldric, like a chain, is worn over the right shoulder and under the left arm.
Anklets of gold and pearls.

From Roshen Alkazi’s Medieval Indian Costume (India and Central Asia). The tale referred to is the Shahnameh and the character is Sudabeh (I am assuming the name is modified in the Indian version). The illustrative style draws a bit on Jaina texts of the period.

This is a doorstopper of a book with great visuals and illustrations that covers an intermediate period of Indian history, starting with Mahmud of Ghazni and ending somewhere around the time of Babur. There aren’t too many costume resources for this period but Alkazi draws on Indian and foreign texts (largely Central Asia and Iran and both Islamic and Buddhist influences) to show the kinds of costumes that were prevalent and the intermingling of styles. It is a little more focussed on parts of India that came under Islamic rulers but covers a lot of ground.

Alkazi’s research was for theatre productions and it is really extensive. Some of the plays are listed at Natrang Pratishthan.

See also X, details of these costumes are also discussed in the book. 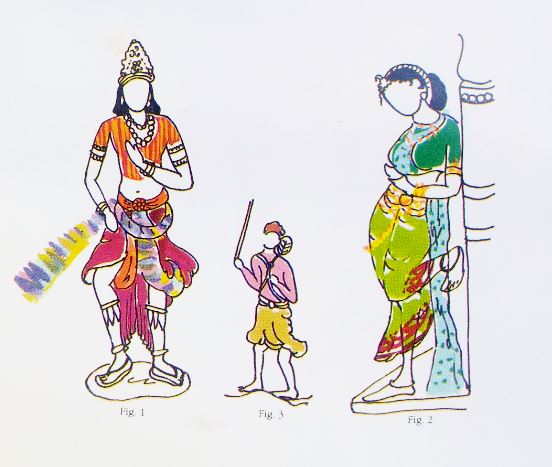 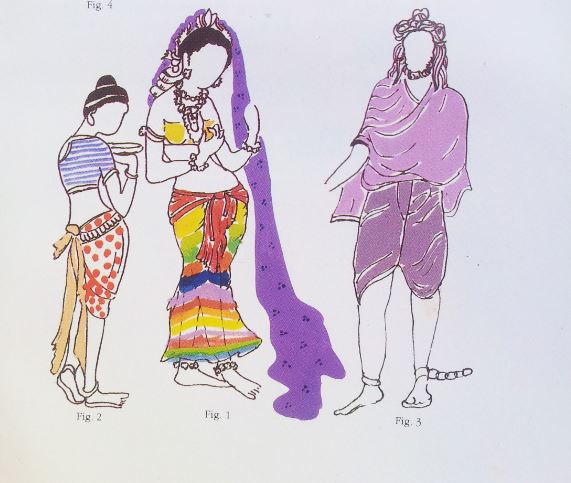 Illustrations from Tarla Mehta’s book on Sanskrit Drama Production. The plays are:

1) Kalidasa’s Vikramōrvaśīyam, the figures on either side are Pururavas and Urvashi, in the middle a charioteer.
2) Bhavabhuti’s Uttararamacharitram, the figures L to R are Sita, Rama, Tamasa and Vasanti.
3) Śūdraka‘s Mṛcchakaṭika, the figures are a maid, Vasantasena and Aryaka.

The illustrations are drawn from various friezes, sculptures and the Ajanta frescoes. Again a very informative book that would be interesting to drama students.

A bit of trivia, the author is the aunt of Ratna and Supriya Pathak.  Also the amount of research done by theater folk on costumes is very comprehensive – I have already referred to Roshen Alkazi, there is this book and so many more!