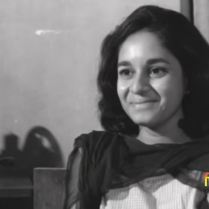 I had a query awhile ago on styles for students and young women in the 1960s. While I answered that privately I thought a few points from it might be interesting to some of you.

For comparison screencaps (top) are of Sharmila Tagore in Waqt and An Evening in Paris (1965 and 1967) and (bottom) of young women who feature in the documentary I am 20 (1967). There is of course a difference between “filmi” styles and real life but a consistent theme is seen.

Given that churidars with short, fitted kurtas/tunics and flimsy dupattas is so common in this decade I would guess a fair few students would have worn it.

If wearing a saree, blouses were quite brief in this decade and often sleeveless. Sometimes you have details, ribbon ties in the back for e.g.

The ¾ sleeve blouse was also around especially in the early part of the decade and would likely have a wide neck.

No hard and fast rule here but pastel plain saris were popular – often with embroidered or painted borders. These – often seen in films – were probably more of a stylish/special occasion thing. The day saree would have been handloom cotton or prints as seen in the screencaps from the documentary as well as the movies (X, X).

All this is summer clothing of course. You could throw on a coat or cardigan and change to a silk sari for the winter.

If the last column of pics presages the blouse styles of the 1970s, parts of the documentary also show lingering influences of the 1950s. In the documentary there is also a fair sprinkling of 60s shifts for young women as well as the skirt and blouse for students. And of course rural costumes which are quite different from the urban styles here,