I didn’t do this post for awhile because I wasn’t able to locate any good pictures, apart from the usual ones of Devika Rani circulating on tumblr, though of course I have posted on fashions of the 20s and 30s. So this post is all thanks to filmkailm (I hope the person running it doesn’t mind my borrowing the pictures!) and its going to be a bit of a spam.

Did the Indian Flapper exist? Not in the true sense of the word, though the fashions of the 20s and 30s in India were definitely influenced by Hollywood and social trends in the West.  But these influences were also curtailed by the nationalism movement in India (as book extracts I am posting today show). Like in the West, the modern girl was censured and mocked (though young men were apparently mad keen on the fashions!), with added censure for departing from Indian tradition.  At the movies this meant a first half devoted to Western fashion, the second to a re-assertion of Indian values.

The post today is on Sulochana aka Ruby Meyers in Indira, M.A., since advertisements for the film refer to her as a “flapper”. And she was the biggest star of the 1920s and 1930s, epitomising beauty and glamour.

Eventually the modern heroine would be replaced by the nationalistic, traditional heroine. But in their personal lives and their public personas, most of the heroines were “modern”, e.g. Devika Rani (though perhaps her influences were more Weimar, given she spent some time in Gemany and collaborated a fair bit with German film makers like Franz Osten). As an e.g.,publicity material for Achhut Kanya (The Untouchable Girl), has the actress looking quite glamorous in contrast to her role.

And its a pity I don’t have any pictures of Ruttie Jinnah, who was quite the society beauty of the 1920s – the descriptions of her diaphanous silk and chiffon saris, tight blouses of brocade cut to the waist back and front with no sleeves, liberty scarves and jewelled bandeaus suggests a woman who was a 1920s trendsetter.

A snapshot below and more at tumblr here. 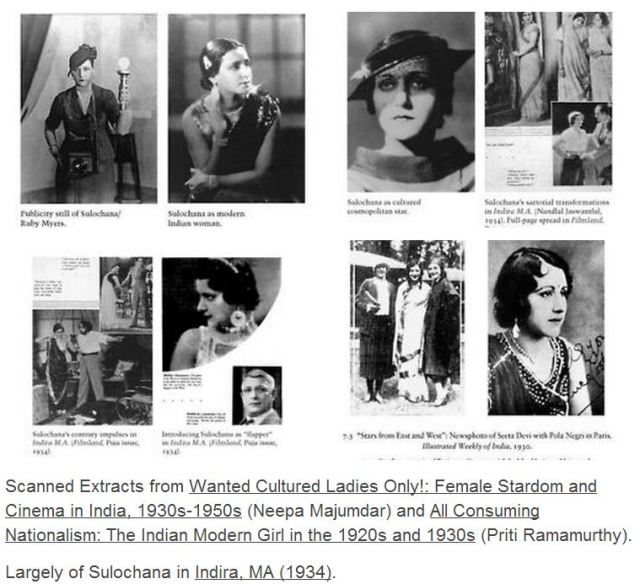 2 Responses to The Indian Flapper