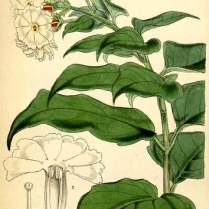 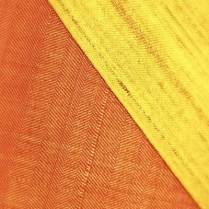 Mimi, on your birthday, tell me what should I buy?
A red sari, a silken blouse, a purple petticoat, and a shiuli‘s shade, its flowers dropping, when the night draws to a close. Selected Poems of Buddhadeva Bose

Getting up early in the morning we would go to the inner garden to collect fallen shiuli flowers. The dried flowers were soaked in water, which was then used to dye clothes. The Many Worlds of Sarala Devi: A Diary.

The parijat (arisen from the sea) is a sacred tree in India and the subject of many myths, including the story of the churning of the ocean where it appears as one of two trees obtained by the churning (the other being the Kalpavriksha). The characteristic cream petalled, orange stalk flower of the tree is known by various names in India, including prajakta, harsingar, pavazha malli, shefalika and shiuli. Its colour, its night blooming, its scent and the like is a recurring motif in Indian literature.

The parijat is a flower that is collected after it has fallen to the ground. Apart from being strung into garlands, it is also used as a dye, either alone or in admixture with other natural dyes. The colours range from egg yolk yellow to orange.

In the extract from Sarala Devi’s diary, it is a household dye that was often used to colour new saris or “freshen up” old saris.

Extras: Info on the parijat; How to make a parijat rangoli.

Unlike jasmine, the prajakta is not really strung and worn on the hair due to its fragility.  This painting with a prajakta gajra and mang tikka is specially done for me by a friend. So many thanks to Arati Phadke for conceptualising and making this painting! Also note the pearl detail on sari and jewellery:)