When you think of Muslim influenced fashion in India you think of anarkalis, gauzy dupattas, tight churidars, a North Indian style that has a tremendous grip on the popular imagination not least because of Hindi movies. While the Mughals with their jama/paijama/dupatta ensembles did influence the courts of India, in reality there is a good amount of diversity with local influences intermingling with northern as well as middle eastern influences depending upon faith and denomination. Often across communities the commonality is only in head covering.

Let’s start with the Bohras and their distinctive “quami libas” (loosely community dress).

Bohra* Muslim clothing is quite distinctive and rich in colour and decoration, the latter of which is varied and includes laces, trimmings, zari, embroidery etc. I have been meaning to do a post forever on them but never found the right images.  Then a friend – Sakina Pittalwala – posted these photographs of her parents wedding in the 1940s on facebook which are quite wonderful and detailed.  Many thanks for her go ahead to post the photographs on this blog!

And now for the clothes. In Sakina’s words, “The dress in question is the ‘ghaghra badan’, a combination of a long flowing skirt, a blouse and an ornately decorated (on the borders) dupatta.  This is the traditional attire among Bohras.  It is also referred to as the ‘jori’, literally meaning a combination of the 3 garments. The dupatta is usually adorned by ‘koran’ which can take a variety of forms – hand tatted lace, brocade, a combination of painting and sequins and in the case of those worn for weddings, gold and silver threads. These can be extremely expensive and often outlast the garments; they then get recycled.  When clearing my mother’s things recently, we came across some koran which must have been at least 50 years old; each one was valued at about Rs. 60,000! The koran is usually created to fit in with the colours and designs of the ghaghra and badan.  These two garments are usually made of the same fabric (though certain sub-communities among Bohras may wear a plain blouse along with a printed ghaghra).  These two may be adorned with additional lace/painting etc. – though this is usually only for those worn by brides or those in the immediate family for a wedding.“

That’s just a little sampler, if you dive into the photographs there is a lot of detail, the most distinctive of which is the bride’s tiara and matha patti.

Notes: In pic 4 the older standing girl has a paijama under her frock – you can see something similar on the girls in this personal album from Karachi. More images of costumes at the site here.

The equivalent of the burqa or hijab for Bohras is the rida, this includes the upper garment (pardi) covering the head which comes down to the waist (some examples here). The rida is a garment which is worn outside the house and like all Bohra clothing has rich colours and decoration.

The girls in today’s photograph set are in frocks (fairly common in India in the 1940s) but here is a little charmer in HK wearing a jabla-izar (tunic-pants) and decorated topi.

Please do keep in mind that these are images from a personal album and do not misuse!

Atiya’s relatives have an unusual approach to women’s veiling, travel, and seclusion. Rather than ‘going native’ and adopting Western dress, Atiya wears a family version of the veil, the Fyzee charshaf, which is a Turkish women’s floor-length cloak worn with a head-covering and gloves. Instead of the ‘oppressive’ veil that is such a Western obsession to this day, it is a liberating garment that can be adapted to its context, as Atiya shows by teaming it with “good walking shoes” and thickening it to keep out the cold. This modest dress enables Atiya to travel where and with whom she wants.[X]

Atiya Fyzee (pic 1) and her sister Nazli with the Nawab of Janjira (Pic 2).

Atiya Fyzee’s parents were Sulaymani Bohra (her uncle was Badruddin Tyabji). Given that the Fyzee girls preferred to be unveiled and were amongst the first Muslim women to study aboard, it appears that their costumes include a number of modifications (much like Jnanadanandini)-here they seem to feature a full skirt, lace blouse and a half-saree like drape (this drape as can be seen is worn in a particular way). Like Parsi, Bohra and Khoja costumes in Western India, the garments make ample use of trimmings, lace and embroidery (please note however that the costumes here are different from the Bohra ghaghra-badan above – dress codes amongst the Sulaimani Bohras were different from the Dawoodi Bohras and often very flexible mixing a number of elements, there is no equivalent of qaumi libas).

Atiya Fyzee is now pretty much a forgotten author though she was well known in her time. Apart from her travelogue she wrote several books on music, including Indian music, which also features illustrations by her husband. She is also the subject of a recent book, on the cover of which you can see the Fyzee sisters costumes. 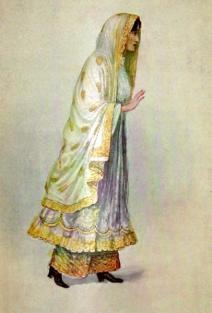 Here are Memon and Khoja women in shirt and trousers (“kurta” and “izzar”) of green and gold or pink or yellow, with dark blue sheets used as veils, wandering along with their children dressed in all the hues of the rainbow. By-Ways of Bombay by S. M. Edwardes.

MV Dhurandhar illustrations of Memon and Khoja costumes in Western India.  Pics 1 and 2 are of Khoja ladies. Lots of trimmings. The wide paijama harks back to the early 19th century in Northern India. Pic 3 is of a Memon lady, you can see the paijama beneath but hard to say if its a sari or two pieces of cloth. There was no specific dress code for Khoja and Memon women so there is an intermingling of elements, further it is likely the above costumes are no longer the norm.

In some parts the sari or a version of it can be seen as in this photograph of a Muslim Lady and Child,  in Ongole, Andhra Pradesh. (1921, Maynard Owen Williams).  A lot of heavy jewellery (silver?) including an armband over a full sleeved blouse. I think the lady is wearing a sari. The child’s silk tunic is of a kind common at the time.

The head jewellery in the above portrait seems to indicate that the lady is from the South of India, most likely the Deccan. There is a good deal of layering in the costume – I reckon this is a 19th century print. And curiously a bodice-common in South India for saris-over the open fronted tunic or jama.  Kind of indicates how the basic jama/paijama/dupatta was worn differently and accessorised differently in Islamic cultures in 18th and 19th century India.  [X].

This list is kind of incomplete, Eastern India is omitted. For one the sari is quite common. Plus not enough good images.