Khazanchi (Cashier) is a 1941 movie which is significant for several reasons (for the full movie X). First, it was amongst a clutch of popular movies made in Lahore that brought in new modes of movie making, until then the Maharashtrian and Bengali ethos had dominated Hindi cinema. Its principal contribution was to music, the Punjabi themes and beats that pervade present day Hindi movies owe a small debt to the popularity of Khazanchi.  It also popularised the salwar-kameez and dupatta ensemble amongst Indian women. Plus it’s introductory song of bicycling women was trend setting both in its portrayal of carefree young women and the “meet cute by bicycle collision” of Hindi cinema.

I won’t go into the plot here and will restrict myself to the costumes of the female lead, Ramola Devi (aka Rachel Cohen – based on this movie a charming and subtle actress), Manorama who plays the teenage sister of the male lead (SD Narang),  Ramola’s stepmother and a Mumbai seductress who plays a key part in the murder mystery plot of the movie.

But first the bicycle song. Almost all the girls, except Ramola, are in salwar-kameez. And there are a few “frocks” and skirts too (presumably Anglo-Indian girls, there are snatches of dialogue in English).

Ramola plays the daughter of a rich merchant, a girl with a good degree of freedom, albeit answerable to her father and stepmother. She is a collegian and travels unaccompanied, whether by bicycle or by bus. Through much of the movie she wears a sari. Her blouse is usually of the puff-sleeve kind with bow ties being added now and then. And of course there are the two plaits – perennial indicator of youth in Indian cinema.

Often the blouses match the border of the sari.  From what I can see of this, it is possible that the borders are separate and added on to the sari, especially where the fabric seems to be some kind of satin. Note also the brooch (which I have helpfully marked!). In the 30s and 40s the brooches appear at different positions, here they seem kind of meant to pin the sari to the lower end of the blouse. That is a lot of pictures – clearly I really liked Ramola:)

SD Narang, who is the male lead, is training to be a lawyer.  The wardrobe department puts him in a lot of suits with an occasional foray into a sherwani. 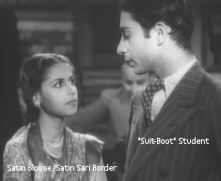 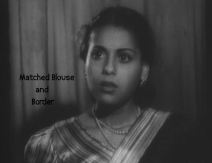 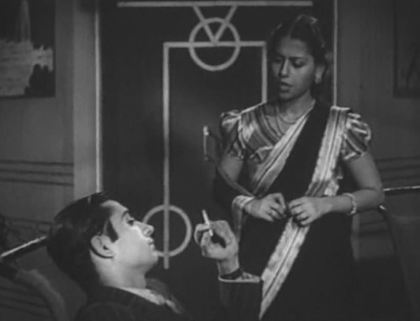 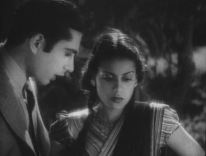 Ramola does wear the salwar-kameez for one particular scene. Almost all the kameezes (tunic) in this movie have large floral prints with elaborate neck detail (the sleeves are also often detailed).

Manorama plays the teenaged sister of SD Narang’s character and the daughter of the eponymous khazanchi of the title. The family is therefore middle class. The actress appears in a salwar kameez throughout the movie. Like Ramola’s, the kameez is often full sleeved and has a floral print. The dupattas – possibly some kind of nylon or synthetic of the 40s – often have a bit of glitter on them. See also this still from a 1940 Lahore movie for a clearer picture. 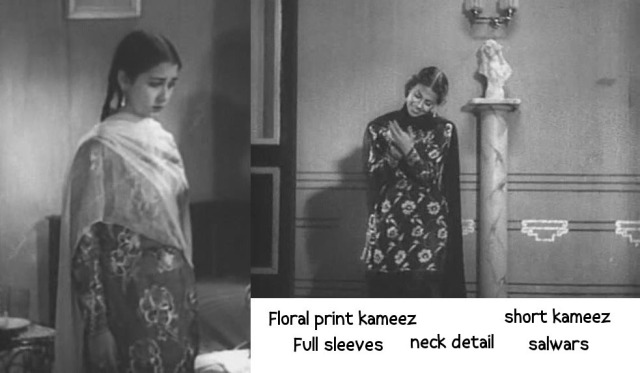 Ramola’s stepmother appears to be a younger trophy wife. Maybe I am reading too much into this but some of the older women in the movie, who appear to be in their late 20s/30s, wear a lot more elaborate costumes. This may partially be due to their wealth but it also harks back a bit to the styles of the previous decade. Or maybe it was just the wardrobe department recycling outfits 🙂 The saris are almost uniformly synthetic fabrics or chiffons, at one point mention is made of saris being ordered from England. 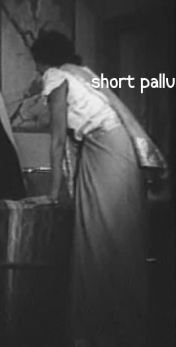 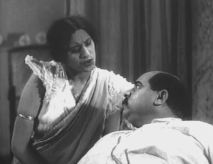 The eponymous Khazanchi (the father of SD Narang and Manorama’s characters) makes a visit to Bombay where he meets an actress/conwoman.  Her saree and blouse is 1940s provocative and again there are a few 1930s elements like the ruffle and the headband. Not to speak of the cigarette and gun, essential accessories for bad girls everywhere:)

And a second appearance of the saree brooch on this lady. 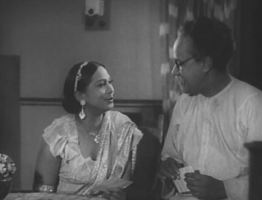 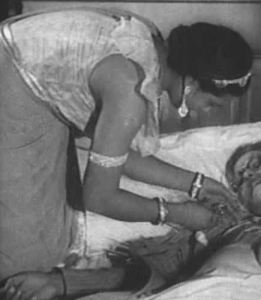 A glimpse of costumes for secondary male characters.  The entire world of the movie is the modern city, first Lahore, then Mumbai. The action therefore moves between offices, courts, boarding houses and the houses of the protagonists. Dress is therefore western or more often the hybrid Indian-Western wear of the time which involved the addition of a jacket and the retention of specific headgear like a cap or Punjabi safa.

There are a few item numbers in the movie. One has an exceptionally saucy lady in a club (ruffle ruffle ruffle and a nice pair of legs is the key to 1940s seduction). There are also a couple of Indian nautch songs where a ghaghra is worn.

A screengrab of the end wedding scene. The head is covered by a pallu and a bindi worn only on specific occasions in the movie.

And last but not the least, the 1940s undergarment:)

The wardrobe of the two main protagonists of Khazanchi, Ramola and Manorama, reveals a simplicity of dress as opposed to the high glamour of the 1930s (these were also the war years and the fight for Indian independence was at its peak). Khazanchi’s success was possibly what made the new kind of salwar kameez, intended for modern young women at work and play, something that would eventually have pan-Indian appeal. It seems to me that, like with the sari, dress reform was at work here. The modifications to the outfit which incorporated new fabrics and were influenced by Western styles changed the dress so that it was no longer intended merely for a) the cloistered life of North Indian women and b) its use as rural working garment in Punjab. Pity that the details are so hazy and it is not better documented.