This post on ruffled blouses refers to Mukti (1937)* [X] [X].  The movie was a bit of a fashion influencer with Kanan’s crown braid and  Barua’s beret worn backwards apparently all the rage. It turns out the movie is on youtube. Not the best print but hey given how difficult it is to source 30s movies I will take any print! So without further ado bad screencaps deconstructing the fashions of 1937 as worn in Mukti.  Post which you can host your own 1930s themed party:)

In the movie, Prasanta (PC Barua) is a 1930s artist and bohemian in back to nature mode and his wife Chitra (Kanan Devi) belongs to the smart set of Kolkata aka the rich and Westernised elite. 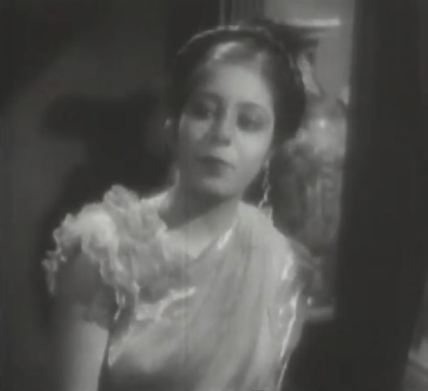 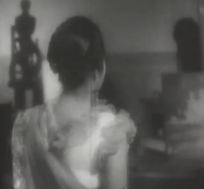 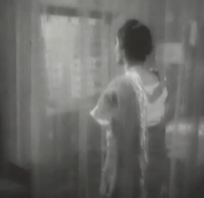 First up ruffles were really on trend so if you want to do anything set in the latter half of the 1930s you can pretty much add a ruffle, either on the blouse or as a saree trim. And here are all the features of Kanan’s ruffle blouse.

In the film clip (about 00.03.00+), you can see that the sari is a chiffon/synthetic sort with a zari border (it is in fact quite rare to see “ethnic” coarse handlooms in many of the early movies-anyone with a bit of money was probably buying up chiffons and getting borders stitched or wearing translucent silks and cottons unless they were swadeshi sorts).  Perhaps given that she is upper class, Kanan wears the “modern” sari and not the traditional Bengali drape.

Kanan also has an armband (00.06.26), quite popular in the 1930s given that sleeveless or barely there sleeves were common.

Throughout the movie you will also note the lack of a bindi on Kanan.  Though sindoor is strongly associated with Bengali culture post marriage, the bindi is in fact not always seen in movies or even in vintage photographs on young women. 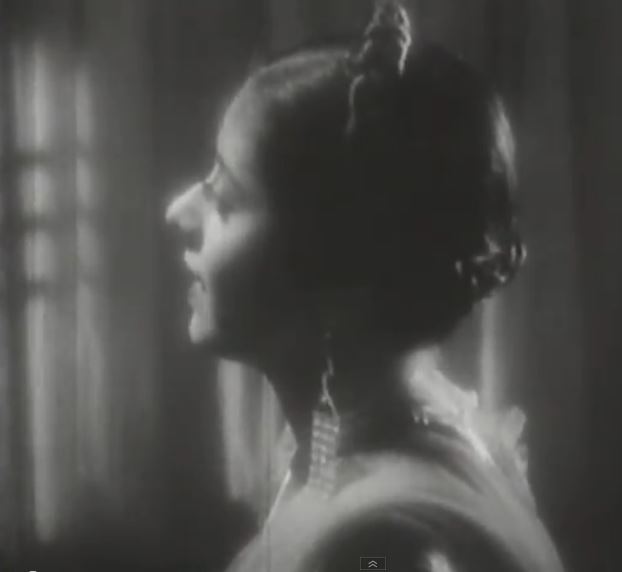 Here is a side view of Kanan’s crown braid.  Add to that chandelier earrings (a common feature throughout the movie) and a purse and some white heels and you were ready to party. Or at the very least shoot pool like Kanan (00.11.20+). 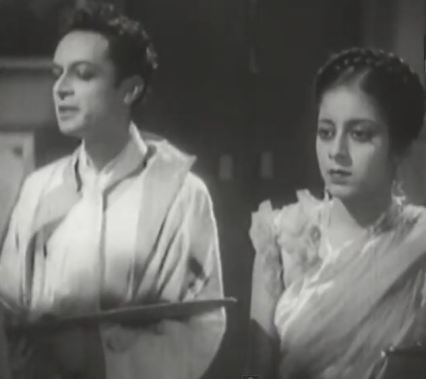 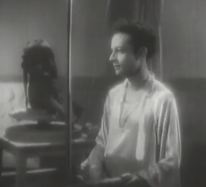 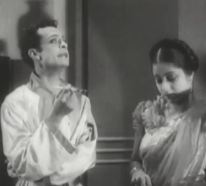 Barua’s persona, at least in this movie, is a little fey and eccentric. He is sort of a 1930s hipster, different for the sake of being different:).  At one point Chitra refers to his clothes as not being fit for a decent person. In his Misunderstood Artist in the City part he wears a tunic that looks like a silken poet shirt that morphs into a kurta and is worn with loose trousers. Also in the beginning some kind of long, silken jacket. Quite deshabille. I am curious, did he devise the costumes himself? 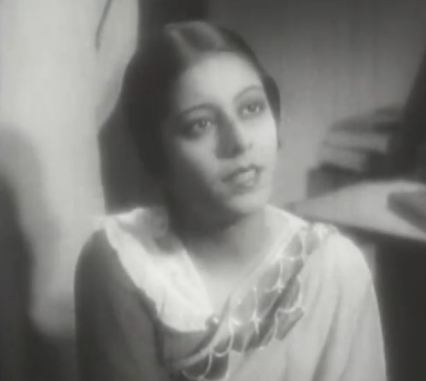 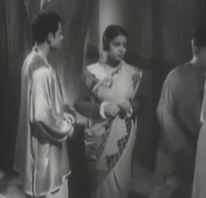 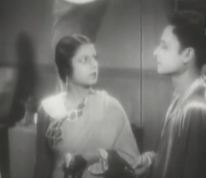 Just when you think you know EVERYTHING about the fashions of 1930s and are like 100% certain that no one ever wore long sleeved blouses with laces and all, along it comes! (see about the 00.29.00 and 00.35.00 mark).  I am going to put it down to Chitra raiding her mother’s closet. The sari seems consistent with the 1930s. Some kind of scalloped embroidery or applique on the border but no distinct pallu (the loose end of the sari).

Jokes apart, a quick look at 1930s movies shows that the full sleeved blouse does turn up now and then even though the decade is fairly liberated and sleeveless blouses were very common. 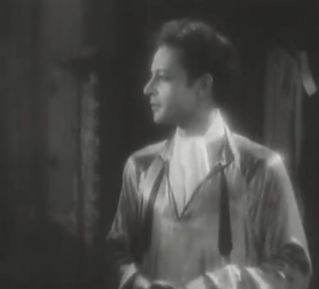 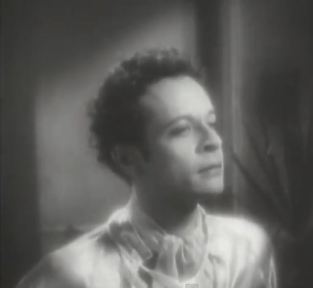 Barua really really liked scarves. At some point in the movie his character Prasanta runs off to Assam to live in a village. His attire gets more peasant like but the scarf never leaves his neck.

Next up Kanan has a butterfly sleeve blouse with a  bit of a contrast trim (around the 0:56.40 mark). The sari is still light and translucent but looks more like a muslin Indian weave (you can also spot the pallu around the 0:59:09 mark).  To contrast with Prasanta’s “Indianness” and artistic temperament,  the smart set, including Chitra’s father, are in suits. 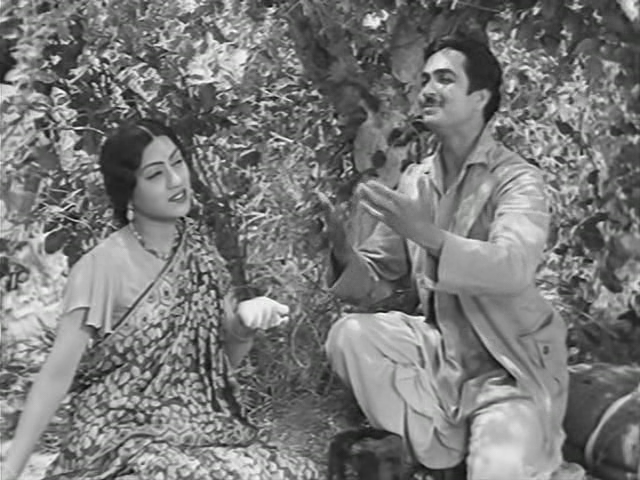 This sleeve was pretty common in the 1930s too, here worn by Shanta Hublikar in the 1939 Manoos. 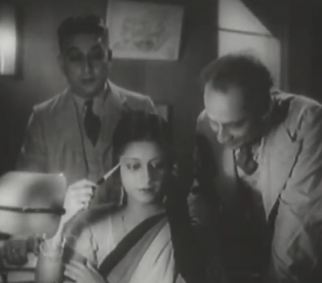 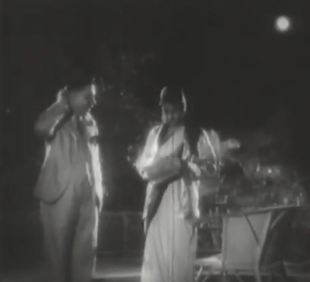 Around the 1.22.10 mark Kanan has something like a satin jacket worn over a sari, hard to get  a decent capture of it.  This is probably the only sari that Kanan wears that is a bordered Bengal cotton sari (see also 1.22.42). 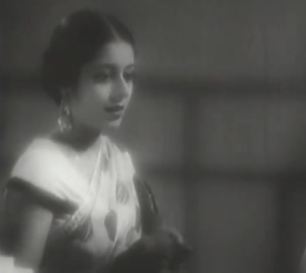 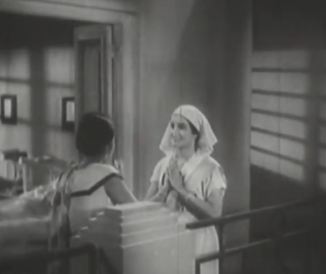 A little later Kanan in another blouse that seems to have been fairly common in the late 30s and early 40s (I have seen it in old family photographs).  Kanan’s blouse is sleeveless with a  kind of – I don’t know what to call it – a cape or capelet collar? giving the illusion of a sleeve. The sari looks like a printed chiffon (1.23.41). 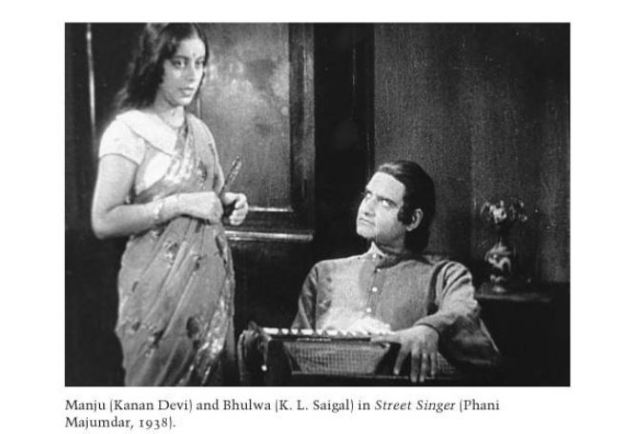 Kanan has a similar blouse in the 1938 movie, Street Singer. 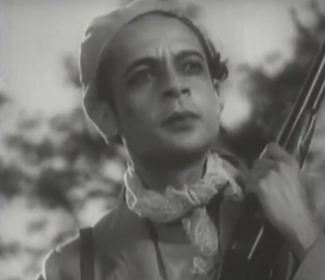 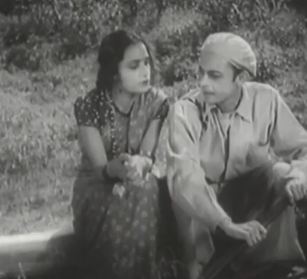 A look at Barua’s famous cap! Every hipster in Calcutta was probably walking around with the cap worn backwards (thus anticipating the trucker cap:)). I can’t say whether it is a cap or a beret or even if its worn backwards with this damn print but I am going with beret worn backwards. (1.33.38). These scenes also have villagers in Indian clothing, both for the men and women. 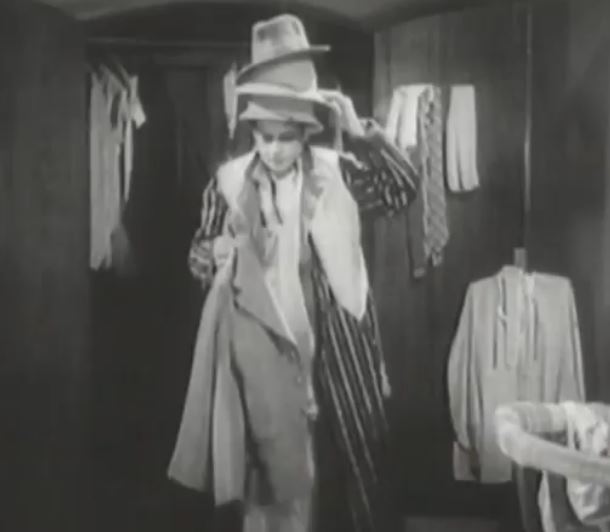 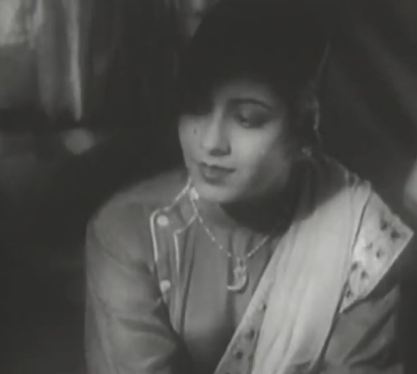 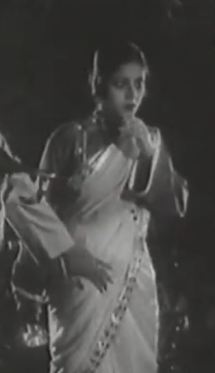 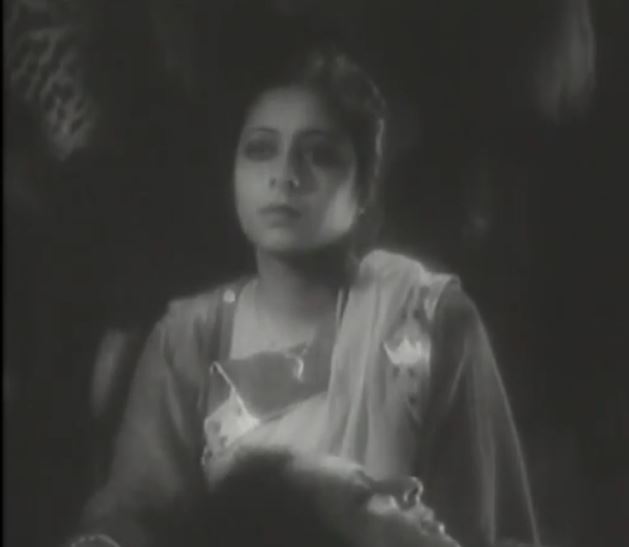 Last up at the climax (around 1.51.00), Kanan again opts for a long sleeved blouse but it doesn’t give off a Victorian vibe. It is more like a kurta or even a Chinese tunic with a side closure.  Kanan’s sari is again a chiffon/synthetic with a zari/gold border.

And with that you know everything about upper class fashions in Kolkata in 1937:)

The movies of the 1920s and 30s are either no longer available or the prints are appalling. In fact a number of plots and tropes of Indian cinema are from these decades. And the fashion is also more fun, not so much in thrall to notions of respectability as at the turn of the century and not as formally beautiful as in the 1950s.  And there are so many interesting women in these decades too, and from what I can see fairly unapologetic about their lives to boot.