Christianity has a fairly old history in India.

However, the arrival of “Christian soldiers” during the British Raj seems to have given rise to questions of attire for missionary work.  For the most part, most women missionaries appear to have adopted the sari and long sleeved blouse. An attire also adopted by Indian Christian women at the time.

As an aside, though Hindu women (and other religious denominations in India), seemed to have no problem in adopting the blouse, skirts, dresses and gowns were rarely adopted because it was far too identified with the Christian West.  Instead the sari at times seems to follow the silhouette of the dress/gown depending on the decade, sometimes wound twice to give fullness, sometimes draped tight to follow the lines of the body. 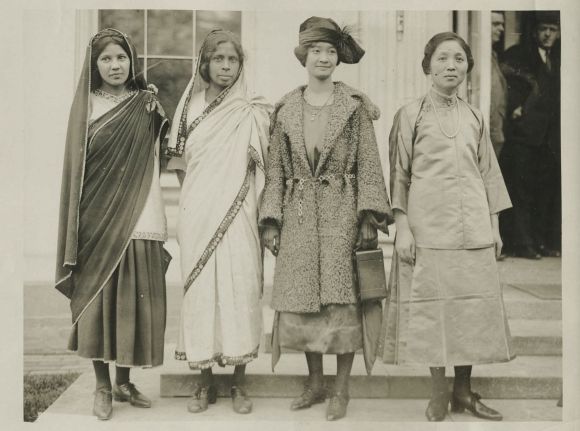 This picture is from a 1922 meeting of foreign missionaries in Washington. The women are Isabelle Dux (India), E.N. Thillayampalam (India), Leoedegaria Sapao (Philippines) and Mei-Lien Chang (China).

For awhile the short sari worn with boots was fairly common.  And as with many photographs of this time, the sari is pinned with a brooch and its loose end draped over the head.

Almost all photographs of Salvation Army volunteers of the time have both men and women in this uniform. In fact there appears to have been a deliberate effort to adapt to Indian culture.

It appears the saris were a sort of sandalwood/saffron colour with a red blouse.

A bit on Booth-Tucker here. 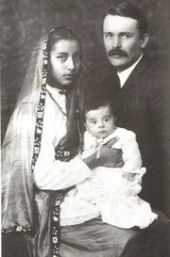 Samuel Stokes came to India as a missionary.  His wife appears to have converted to Christianity and in this picture she is in a long sleeved blouse.

Subsequently Stokes converted to Hinduism (as did his wife). His life story is the subject of a biography by his grand daughter. And those apples in Simla –he might have had something to do with them. 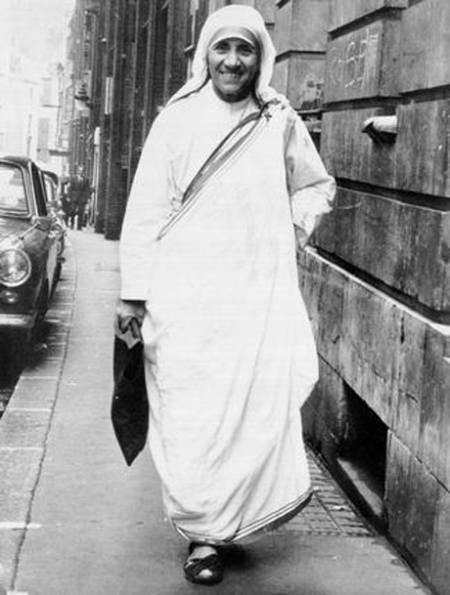 In the same tradition, Mother Teresa in a sari tied Bengali style and again with the long sleeved blouse.