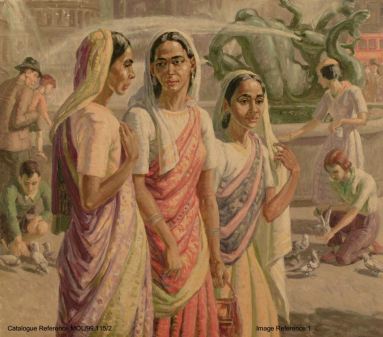 By the 1930s the image of a cherished ayah had been enshrined in the nostalgia of the Raj that had been generated at the close of the nineteenth century. As that image took on a life of its own, individual recollections of British colonials were compressed and compelled into the one abiding memory, as Margaret MacMillan put it, of “a much loved ayah, usually a small, plump woman with gleaming, oiled hair, dressed in a white sari, who had sung to them, comforted them, and told them wonderful Indian stories”.  Responding to the West: Essays on Colonial Domination and Asian Agency, edited by Hans Hägerdal.

In addition to the ubiquitous ayah, cooks, gardeners, syces, and many other Indian domestics in colonial households influenced the daily lives of young residents. The results were predictable: British children grew emotionally attached to their ayahs and other Indian attendants, and they frequently acquired more familiarity with and fondness for the language and culture of these people than they did for the European heritage of their parents* The Magic Mountains: Hill Stations and the British Raj,  Dane Keith Kennedy.

The British in India, from the very beginning, were expected to maintain an establishment with a good number of staff. There are several accounts of the expenses incurred by domestic staff as early as in the late 18th century.  In letters home the problems and the conveniences of maintaining an establishment are detailed. Of all the employees a British household had, the ayah was the most cherished (though there are negative accounts too, particularly in the initial years of the British in India).  Functioning as domestic help but largely associated with being an Indian nanny, they appear in paintings and pictures on the 19th and early 20th century (the earliest probably being Joshua Reynolds portrait).  Partly this was to document – and perhaps boast – of their lives in India. Partly this was because social intercourse with Indians for the British was often restricted to their domestic staff, few Indian middle class families permitted the inevitable interaction in the public sphere to spill over into the private.

There are numerous photographs of ayahs, often seen with their wards and sometimes as part of a family picture. Almost always they appear in white saris with coloured borders, teamed with a printed or plain blouse. Ayahs were amongst the first Indian women to travel abroad on work, often finding themselves in a precarious position. By the 1950s, the saris are depicted a lot brighter as in this oil painting in London.

*For precisely this reason, many British children were sent back home to boarding schools at an early age.

Note: Maids, attendants and the like also occur in Indian miniature paintings and in ancient Indian art, often as intimates, in for e.g. a woman at her toilette, delivering love messages etc. I won’t be covering that at the moment. 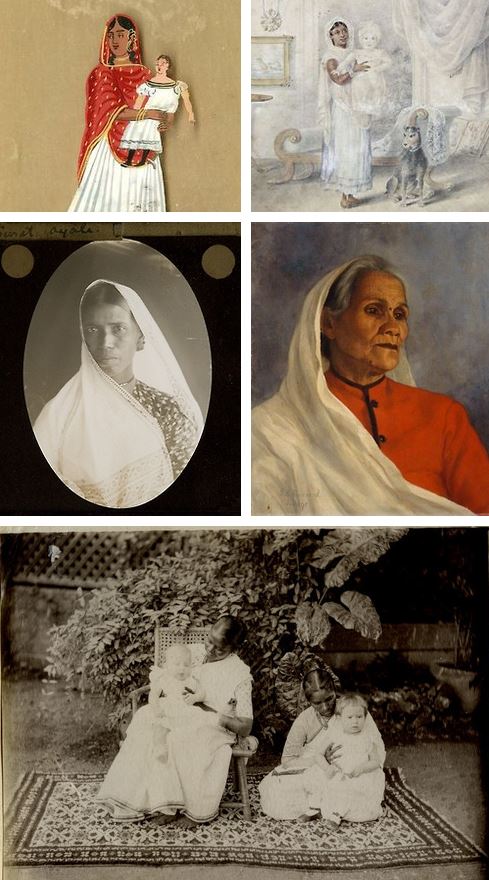