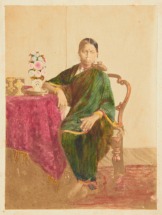 The daughters of the Diwan of Travancore in 1868. They appear to be Bala, Neena, Sundara, Sati?. The Diwan was a Maharashtrian from Thanjavur, the sari and ornaments are similar to that seen in Maharashtra and South India in the late 19th century (in fact these styles persisted well into the 20th century). Except for Sundara in pic 3 – wearing what looks like the half saree – they all appear to be wearing nine yard sarees. The colour of the saree in three of the pics is akin to what in Tamil is called araku.  At least in pic 2, the sari end is secured to the body at the shoulder by a brooch as here.

Jamnabai in 1875-6. (For Jamnabai see here).  Apart from the blouse which is a Victorian influenced style, the sari and anklets and other elements are also seen in the 1911 portrait of Chimnabai who was her daughter-in-law.

Suniti Devi, Maharani of Cooch Behar (also the grandmother of Gayatri Devi) in 1887. The sari is worn Bengali style, the blouse cannot be seen but is possibly the fuller versions worn in this period. You can see a bit of the high collar (and the jewels) in the close up.  Suniti Devi has a quiet elegance and is probably the grande-dame of House of Cooch-Behar aka Ladies who knew how to dress well. 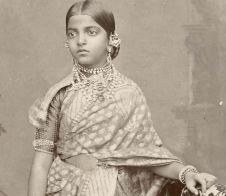 Apart from the characteristic way of pleating the lower half of the sari, note the belt and also the way the pallu is pinned to the body of the sari over the shoulder (this is the first time I have seen this arrangement).

‘Rubbish, rubbish!’ she exclaimed when she saw them, and picked out over 200 superb saris for her tomboy daughter, in plain and patterned chiffon, with and without borders, some hand-embroidered, others appliques, some embroidered in gold and others of simple, heavy silks.

‘Ayesha, I am afraid, doesn’t wear her sari half as well as her mother,’ said a family friend. speculating that Ayesha always stood in her adored mother’s shadow, defining her self against Indira at the same time as fearing she could not live up to her example. Maharanis, Lucy Moore.

More often than not if you think of a royal style icon, Gayatri Devi is the name that comes to mind. Her style is to some extent derived from her mother, Indira Devi. Indira Devi’s initial 1910s look as a young woman (on her way to a wedding that did not take place, Edwardian style, wedding in London) gave way to a more sophisticated look in the 20s and 30s (X, X, X, X) which employs a lot of chiffon sarees and you can see her influence on her daughter. She didn’t entirely discard the nine yard sari (she was the daughter of Chimnabai)  it appears in paintings and photographs.

Today’s pic from A Year with the Gaekwar of Baroda (1911), the book has a dedication to her. The sari is probably a Chanderi/Maheshwari sari.

Unidentified Maratha Princess, 1930s. The saree is worn in the nine yard style (nauvari) but appears to be a sequinned/embroidered chiffon with a stitched border characteristic of the decade.  Though the gold butis are kind of traditional. Like in this pic, thick anklets, but worn with a mojri kind of shoe.