This doesn’t cover all the North Eastern states of India neither is it chronological or thematic. Rather it’s a North East sampler that includes a fair bit of dance forms in the North-East.

The components of the Manipuri dance costume include a) kumin (the bright skirt) b) pasuan (gauzy overskirt) c) khwangyet (cloth belt) 4) meikhumbi (veil) and 5) koktumbi (tapering cap). Collectively the costume is called potloi.

While the stiffened skirt and frilled overskirt are now seen as characteristic of Manipuri costume and is also the bridal dress (though the overskirt is not frilled here), it’s history is fairly recent. See for e.g. manipurtalks and minai’s post. The kumin is a variant of  the phanek and seems to have acquired a cylindrical form for most of the 20th century. Though the simpler version is around for awhile as in this 1954 pic. 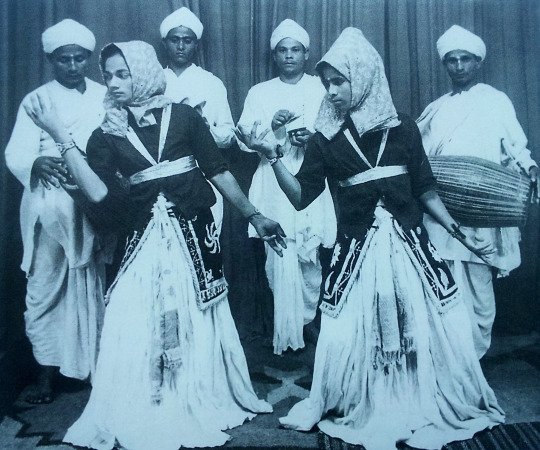 Per Mallika Kandali every Sattriya dance has its own dress code which is strictly followed in the sattras. But on the contemporary stage “ek-aharya” (single costume) prevails. Even here there is some difference from costumes of the 50s but a contemporary costume would include a ghuri (ghaghra) of pat silk, a riha (upper wrap) placed on both sides on the chest and a blouse. A belt with strips (kanci) completes the dress.

I did spot the velvet embroidered jacket in one contemporary costume but it is also a bit of its time given the popularity of embroidered velvet in the early 20th century. 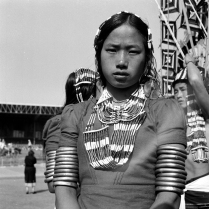 Given that States/Union Territories participate in the cultural part of the Republic Day parade in rotation, it appears that the North-East was well represented in 1956. In today’s photoset from photodivision, the folk dancers are from Sikkim,  Assam (Jaintia*), Manipur and NEFA**. Not many happy faces apart from cheerful Sikkim girl wearing a wristwatch:)

Some beautiful textiles and jewellery in there. These are not representative of the entire state given that there are a number of tribal communities in North-East India. 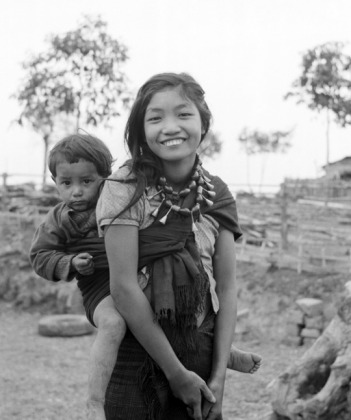 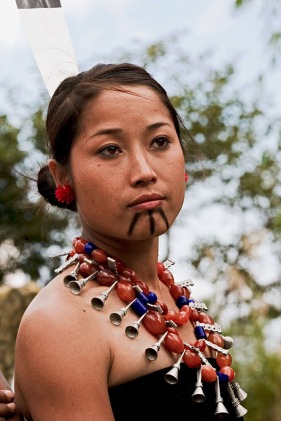 I am fairly sure the necklace of carnelian beads and silver flutes is indicative of the Ao Naga though probably not restricted to the Ao Naga – e.g the Tetseo sisters [X] wear it quite often.

Most folk will no doubt be aware of wearabout; it showcases some really cool northeast fashion.

Chalk and crayon sketch, Naga girl, 1955 by Lily Eversdijk-Smulders . She looks quite lovely and stylish.

I can’t quite identify the naga group based on contemporary  portraits, also wondering if  the ear ornament is rhododendron blossoms.