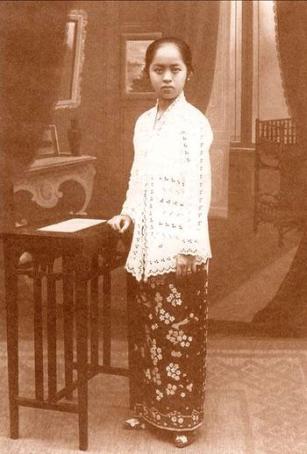 I have spent a fair bit of time in South-East Asia over the past year and got a little curious about the region’s (and East Asia’s) clothing history.  As in India, almost all the countries of the region went though a process of evolving a national dress (also X).  As in India there are regional variations.

While by no means definitive, a look at some of the clothing for women in the region in the period 1920s-1940s (bar pic 1 which is 1900s in order to show what I think is the chang kben – it seems to have a kachcham aka the tying of the cloth between the legs as in the dhoti).

Roughly a sheath like or tubular lower garment is common in SE Asia. In Laos and Thailand this is the sinh.  Additionally in Thailand, Laos and Cambodia a dhoti like garment (sampot or chang kben) was in use.The upper cloth which can cover the breasts and also the shoulders is common and generally an elaborate weave or ikat.

In Malaysia and Indonesia the lower garment is the sarung, The addition of a blouse is common and widespread aka the kebaya (X). In Malaysia it is more commonly known as the baju-kurung (X). While woven cloth and of course ikat is common you see a lot of batik. 1885 picture here. The kebaya encim of the Nyonya are also derived from this (X).

I didn’t have space (tumblr!) to put in the Philippines which had a number of Spanish and American influences on the native costume but there are some examples here of the baro’t saya (the saya being similar to the sarung) -the butterfly sleeves are very characteristic of the costume (X, X).

The hanfu is generally claimed as the origin of clothing styles in East Asia. While many of the clothing styles in the region are said to derive from the crossed collar style of the hanfu, personally I think that even with borrowings clothing tends to be quite distinct and specific and influenced by geography and culture.

In Vietnam the ao dai was common. There is actually an excellent chart on Vietnam’s historical clothing available. Like in Korea and Japan, there are Chinese influences on the clothing.

The qipao/cheongsam is seen as distinctly Chinese in origin. It is in fact a Manchu garment. Early versions were closer to the changshan (per Eileen Chang the changhsan was adapted by educated women) before becoming the very fitted version we are more familiar with. In fact the loose version was more commonly used in daily life. There are plenty of resources on  traditional Chinese clothing, largely on the qipao in the 20th century (X, X, X).

I think the costumes of Mongolia at this time also had distinct Manchu influences.

The hanbok has a jacket (jeogori) and a skirt (chima). The way colours are combined is quite specific for the hanbok while the jeogori underwent a number of variations with the short bodice more common in the early 20th century. Because of the length variations possible with the chima, the reformed shortened hanbok was quite popular in early 20th century Korea (X).

The kimono (and yukata) is again well known and extensively documented. In the 30s the drape of the garment seems to have remained unchanged with modifications in fabric and print. In the pic here (No 10) it is worn with a haori.  In fact western outerwear like jackets and coats could be easily worn with most SE/East Asian clothing.

As far as I can see it is only the sarung-kebaya and the baju-kurung (and perhaps the summer yukata, X) that remain in everyday use, the rest appear to be worn more for special occasions.

My favourite of the costumes is the hanbok but truth is each has its special history and charm and there has always been a good bit of thought behind the evolution of each, especially in the early 20th century. Its been great to be able to see them on the streets and in the museums.