The Last of Spring 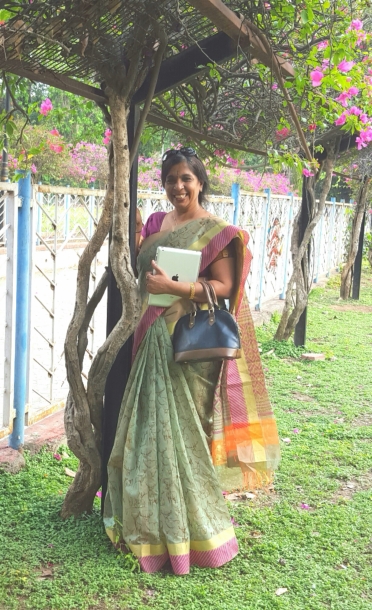 Expectedly has a floral theme.

My cousin Sujata who is a habitual sari wearer and looks pretty glorious in it. 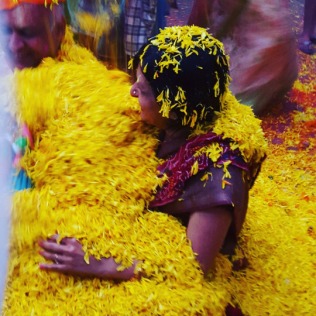 Taken on a Rang Panchami day @ the Empress Garden in Pune. The celebrations – by a private party who had hired the garden – began at dusk, passers by were encouraged to join. While a little colour was used, flower petals were preferred for play. Marigold is not exactly a spring flower but is pretty much all season and also is the colour of an Indian spring.

The ladies in the second pic were there to help with the dinner that followed.

A popular festival was celebrated in spring known as the ashokapushpaprachayika, or the gathering of ashoka flowers, when young women collected ashoka flowers, decked themselves with gorgeous clothes and inserted orange-scarlet bunches of its flowers in their glossy jet-black hair. [X]

Before proceeding to the temple the Mahratta women gathered from two trees, which were flowering somewhat below, each a fine truss of blossom, and inserted it in her hair at the back of the head… As they moved about in groups it is impossible to imagine a more delightful effect than the rich scarlet bunches of flowers presented on their fine glossy jet-black hair. [X]

My Mumbai place is surrounded by Ashoka (Saraca asoca) trees. Towards the end of February they start blooming, in March the trees are covered with bright orange blossoms and by April the flowers being to wither presenting almost a blackened and burnt look as the summer takes hold.

So much is the familiarity with the False Ashoka (Polyalthia longifolia) by now that few people are aware of the “real“ Ashoka. Even our gardener refuses to accept that this is the Ashoka of the Ramayana and Sanskrit literature and thinks of it as a Ixora variant!

Next spring I need to organise, if not the ashokapushpaprachayika, at least an Ashoka appreciation walk:)

2 Responses to The Last of Spring