Miniature paintings of the 18th century and early nineteenth century sometimes contain Christian themes.  Often these were commissioned by Europeans, the palette and figures are reflective of prevalent Indian styles with some modifications.

Oudh offers some examples of paintings of The Annunciation [X] [X] [X]. A number of paintings are attributed to Mir Kalan Khan. 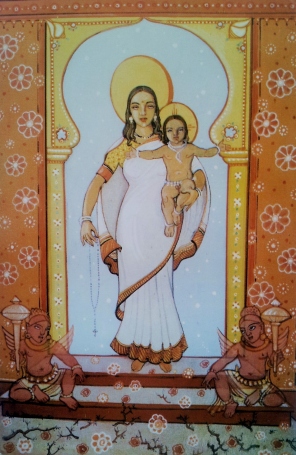 A 19th century painting of Madonna and Child with a melding of styles. And a later version by Angelo da Fonseca (around mid 20th century) which is distinctly Indian. More of da Fonseca’s work here.

A bit late in sending out these wishes but hope you had a Merry Christmas! And wishing you all a Happy New Year!