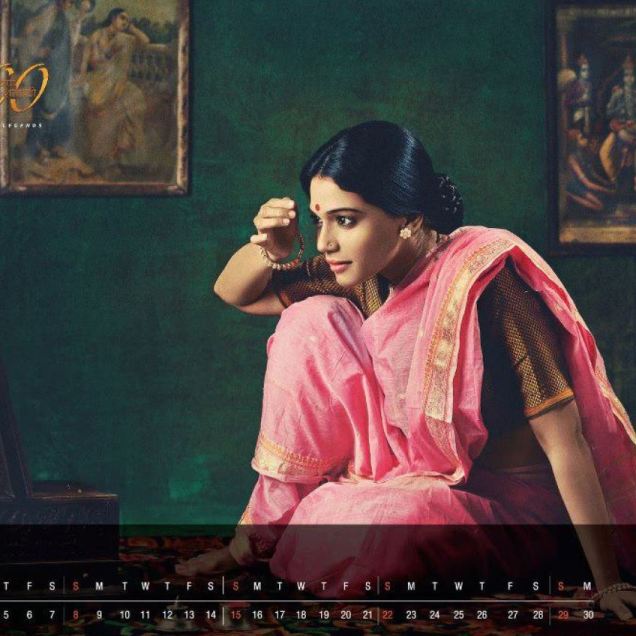 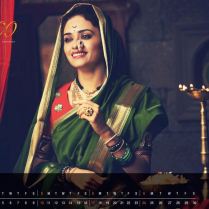 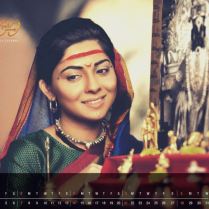 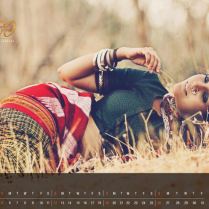 Zee Talkies got a bunch of actors to recreate iconic roles in Marathi cinema for its 2013 calendar. The ones in this post are:

Pic 4-Mukta Barve as Smita Patil in Jait re Jait.

There are different kinds of handlooms in Maharashtra. I can’t exactly id the sarees but I am guessing Pic 1 is Maheshwari, Pic 2 is Narayanpet (a bit uncertain about this) and Pic 3 and 4 are Ilkal* because of the characteristic pallu. In Pics 1, 3 and 4 the blouse is khan.

In the pics you can see some of the several styles of bindi in Maharashtra. The first of course is the kumkum/sindoor worn by married women and not specific to Maharashtra.  In Pic 2 you can see the chandrabindu – normally a red crescent with a black dot underneath – which is quite particular to Maharashtra (and maybe parts of Goa and Karnataka).  In Pic 3 is a horizontal red line, also quite specific to Maharashtra.  I canvassed a couple of friends but the only information I have that it possibly worn by rural women and is specific to some castes. A few accounts of Deccan paintings refer to it as chiri. Last up the black designs that used to be worn by tribal women (sometimes these were tattoos).

*Ilkal saris made of silk and mixed silks in Ilkal in Karnataka were very popular and fairly expensive in the 1900s or so in Maharashtra. Subsequently cheaper varieties were developed in Maharashtra which is why its probably a rural sari in pics 3 and 4.