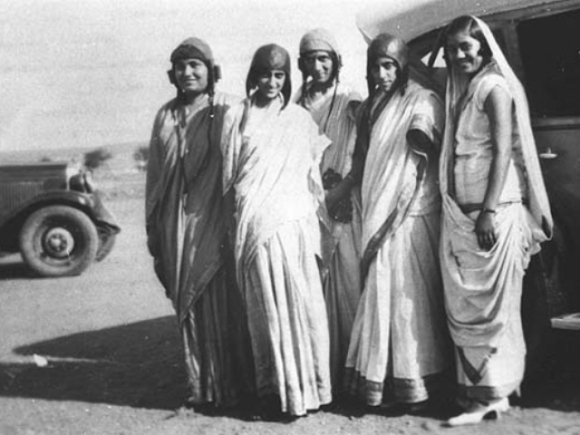 At the 1931 Congress meeting, Manmohini was a minor celebrity, beseeched by young women and men for her autograph and frequently snapped by Brownie cameras. When a young man offered to drive her and her friends to an airstrip where a small plane had landed, he soon had a car full of single women in their late teens and early 20s ready for an adventure. The young women donned helmets and prepared for a flight that never happened. However, the fact there was no flight is of little importance compared to what this photograph represents in terms of female autonomy in the early 1930s. Gandhi’s initiatives legitimated independent political action by young men and women that made possible new friendships and adventures. At the same time, these educated and self-assured young women gave the North Indian movement a youthful, self-confident and glamorous image.

A little intrigued by the attire of the girl without a helmet.  The blouse is rather long (probably true for all the girls). Her hair seems to be cut short too and the shoes look quite fashionable.